We don't need engineers who are proficient in Kubernetes, we need a management tool that can be used by novices. -- Guo Chuanhao

Hello everyone, my name is Guo Chuanhao, the head of operation and maintenance of Xiamen Zhengguan Yizhi Technology Co., Ltd.

The library is a cloud-based private library that focuses on users' self-growth. It integrates the functions of reading, recommending, borrowing, purchasing, storing and knowledge management of e-books. It is committed to the cognitive empowerment of users. achieve self-growth.At present, the cumulative number of registered users has reached 1500W, and the platform book resources have exceeded 200W.

We have been using Rainbond for 2 years and I am sharing our experience with you.

Libraries in the cloud-native era have a high starting point. From the very beginning, we have selected technical systems that conform to the trend of the times, such as microservice architecture, Kubernetes, and containerization.However, the functions provided by the native kubernetes management platform do not fully meet our expectations, and we cannot afford the huge technical cost of secondary development.

Before learning about Rainbond, in the early days of our business, we were stuck with the trivialities of frequent product iterative changes.The trivia I am talking about includes the version management of 50 services under the microservice architecture, the replacement of build products, the release of the online environment, and all kinds of tedious work around the application from development to launch to operation and maintenance.

We hope that we can get out of these trivial matters, focus on the business itself, and explore a simple path suitable for continuous development and continuous delivery in the kubernetes environment.

In view of this, we began to actively look for an open source and easy-to-use application management platform.

Before Rainbond, we have tried products such as Rancher, but the product features are far from our expectations.

We first learned about Rainbond through Github 2 years ago, and were pleasantly surprised that the functionality was well suited to the needs of the library.Name a few impressive abilities：

In the step-by-step exploration process, the interaction with the official team in the community has saved us a lot of detours.An open source product can be very reassuring if it is accompanied by a living community.

The first step is to deploy microservices​

Getting started with Rainbond starts with deploying a single microservice. This process is very simple and does not require learning Yaml of Kubernetes.The components in the development environment are built based on the image, and you only need to fill in the image address and related information according to the guidance of the interface.

We use the Spring Cloud microservice framework, which can run well under the Rainbond system. I have been affected by a series of documents during the deployment process, and I will share with you here:

The second step is to orchestrate services in a visual way​

In the process of arranging microservices, the function of graphically editing component dependencies really surprised me.This arrangement is very different from the way other platforms organize based on complex Yaml files.Interested friends can read the descriptions related toService Orchestration, which is indeed a microservice orchestration method that novices can control.

The third step is to connect to external services​

For a startup like us, hosting the database and other services to a cloud service provider and using the RDS service directly is an economical and robust option.In the Rainbond system, I manage the RDS services in the cloud by adding third-party components.This inclusion allows third-party services to be relied upon by other microservice components as if they were deployed in the platform.

So far, my development environment has been deployed.

The fourth step is to copy the test environment, pre-release environment and production environment​

In the past development process, setting up the environment was a very cumbersome thing.For a product in the process of rapid iteration, we need at least a development environment, a test environment, a production environment, and in our own actual scenario, a pre-release environment is also introduced.For the code, I only need to fork multiple branches to distinguish different environments.By defining pipelines, we have also completed different tags for packaging images of different code branches.But when it comes to building the environment, is it only possible to manually create components a little bit according to different image tags?Thinking of the nearly 50 microservice components of the library business, and the dependencies between them, my head is big, and the most unbearable thing for IT practitioners is duplication of work.

In the process of exploring how to use Rainbond, this function quickly caught my eye.The quick copy function can check out the build source information of all components. For a component built from source code, the build source is its code repository address, programming language, and code branch; for a component built from an image, the build source corresponds to the mirror address and tag. .Under such an interface, I can select the component that needs to be copied and modify its tag version.Such replication capabilities can realize the replication of environments under different clusters and different teams.The new environment inherits all the set：dependencies, component names, environment variable configuration, persistence settings, etc. in the original environment except the image tag. 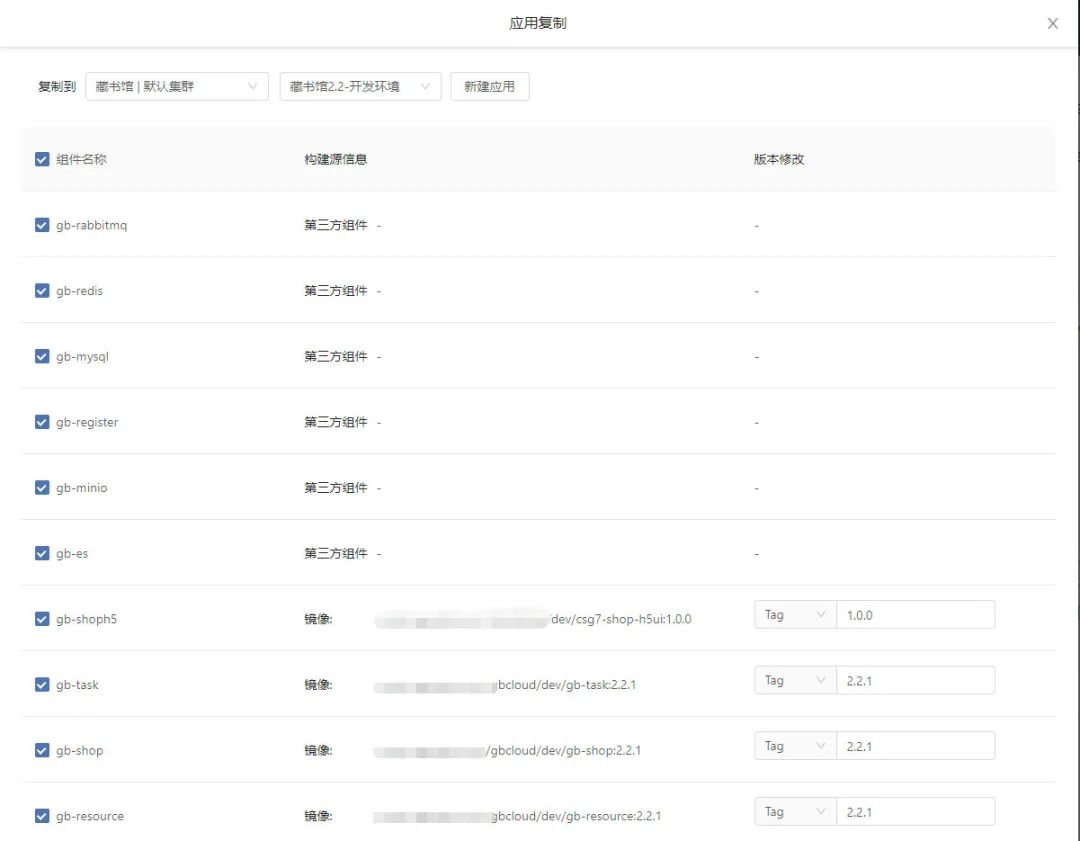 Earlier, we have customized a complete pipeline with the help of Jenkins to realize the construction of all microservice components.The final build product will be customized as an image and pushed to the image repository.We are quite satisfied with this part of the work, and we hope that Rainbond can be integrated after the image repository to complete the continuous construction and deployment of microservice components.

Rainbond is very open in this part, providing interfaces to interface with third-party CI tools.We only need to add a simple call to the interface provided by Rainbond after the Jenkins pipeline completes the image push, and the corresponding microservice component will automatically pull the latest image and complete the online operation.So far, the entire technical team has adapted to this usage. 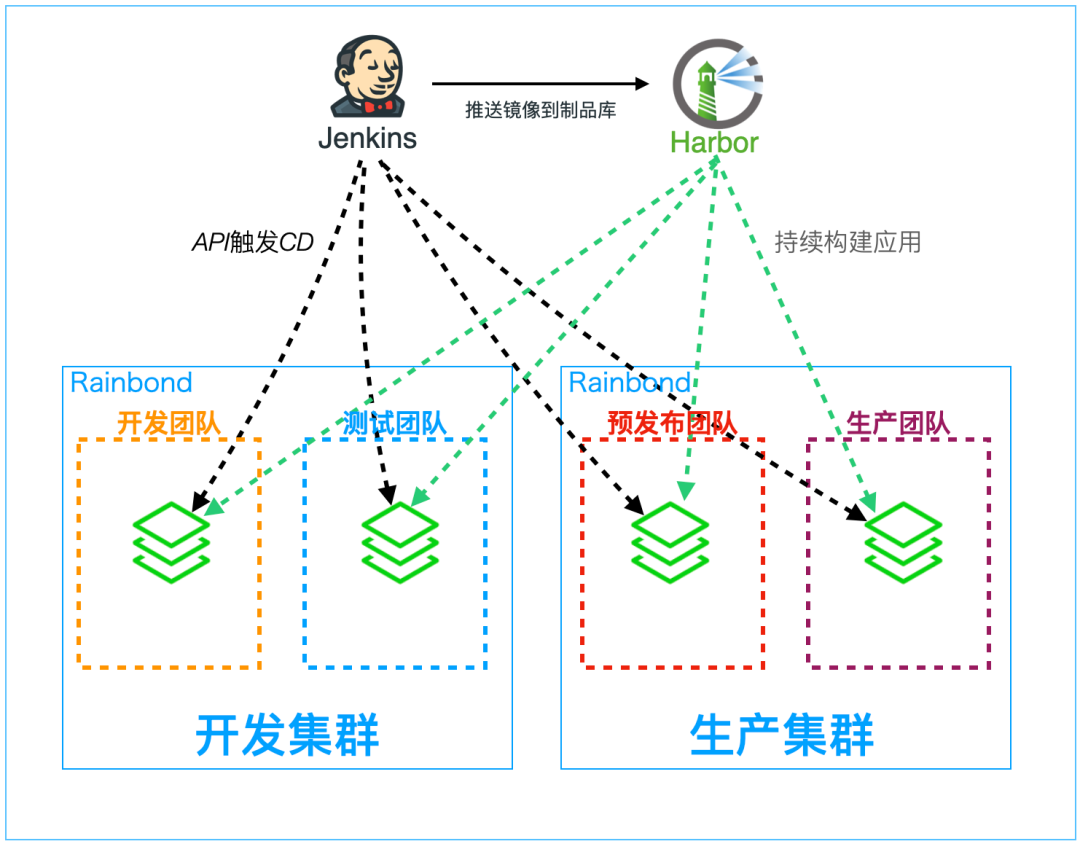 In fact, this is a very common interface calling method, no matter which third-party CI tool is connected to, it can be easily called.

At present, we have been able to accurately trigger the specified pipeline in a very simple way to complete the update and launch of the corresponding microservice components.

Other issues solved with Rainbond​

With the deepening of our understanding of the Rainbond product, we began to throw away some trivial matters. Some problems that are difficult to avoid in the traditional deployment mode can be well solved with the help of：'s capabilities.

write at the end​

As with any other product, getting deep into Rainbond requires a bit of a break-in process.One situation that impressed me was the Glusterfs distributed file system used by Rainbond, after a long period of use, the storage capacity was used up, causing a series of problems.Our ops lacked understanding of Glusterfs, and even less understanding of how Rainbond interacts with Glusterfs.In desperation, we asked the official for help. Unexpectedly, the official engineer supported us to solve the problem very enthusiastically, and left the operation document intimately.

My biggest impression of Rainbond is its ease of use.Hopefully the Rainbond team can follow through on this and provide more practical features that can solve real problems.We learned that Rainbond's Service Mesh can support istio in the next step, and we plan to try it in the next stage.