Before deploying the project to Rainbond, please follow the steps below for local verification. After the local build is successful, you can start trying to deploy the project on Rainbond.

Rainbond supports the graphical definition of the compilation and runtime environment, and the configuration is located on the build source page of the service component.Modifications to these configurations need to take effect through build! 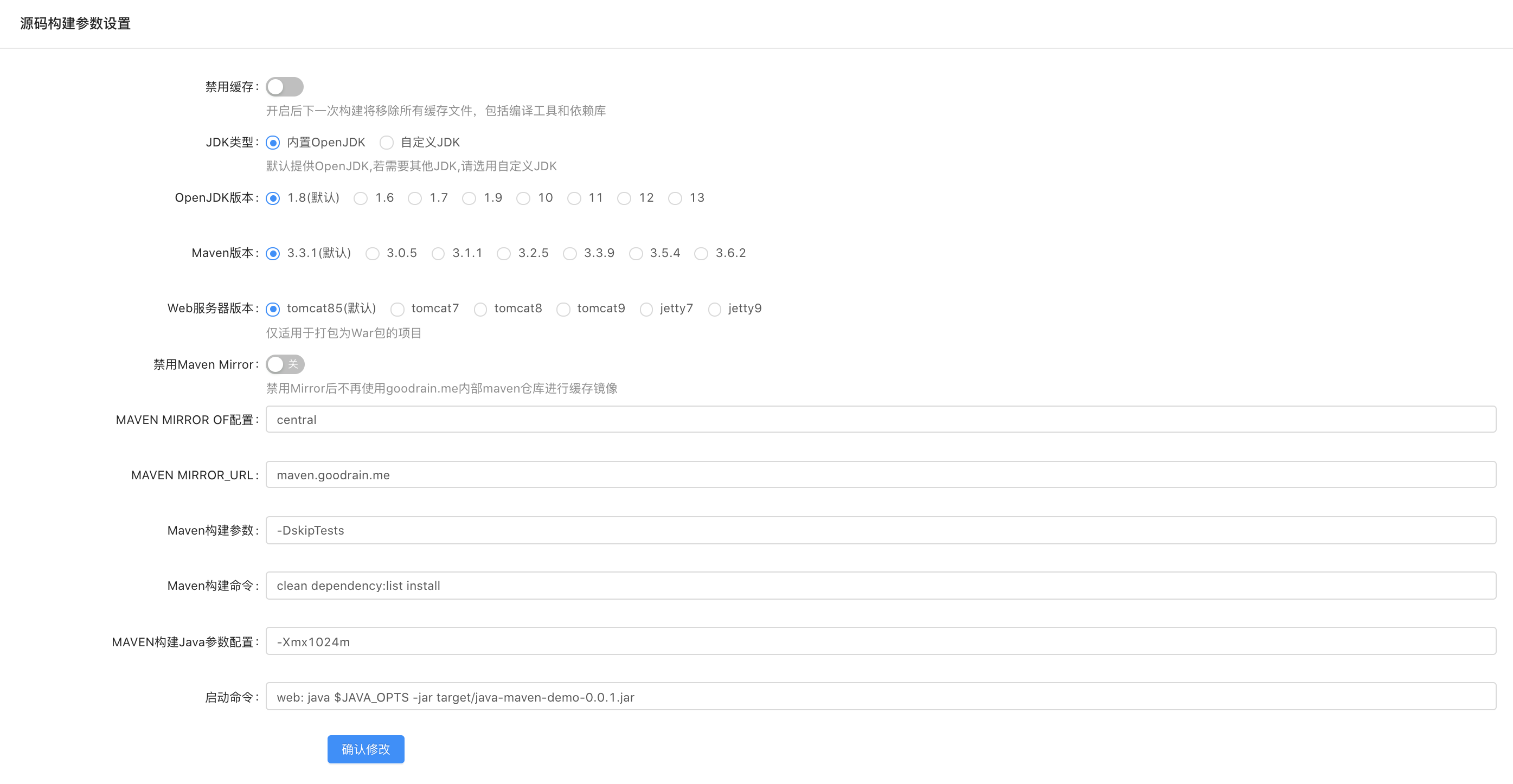 Rainbond supports defining all of the above configurations in code.The advantage of this is：by adding several configuration files to the source code repository, the definition of the compilation and running environment is completed, and automatic CI is completed without any manual configuration.

Add system.properties file in the root directory of the source code, you can define the Maven version, JDK version,Be sure to use the version verified when preparing for verification：

The selection range of the two versions is as follows:：

In the upcoming Rainbond v5.2.2 version, the settings of settings.xml will be added to the graphical settings.

If your code root directory defines mvnw, this script will be used to start the Maven process.If a Maven version is specified,mvnwis ignored.Build with default commands.

During the Rainbond source code building process, the variables defined for service components starting with BUILD_ can be passed into the build environment for use.Some commonly used environment variables are as follows:

Rainbond defines the project startup command through the Procfile file in the source code root directory, and theProcfile file definition specification is detailed in Procfile.

The startup command can be entered graphically on the service component building source page. The format of the command entered here is the same as Procfile , and the priority is higher than Procfile in the source code root directory.After the input is complete, it will take effect the next time the current service component is built.

If the project does not define a Procfile, the platform will generate a default Procfile based on the identified project type by default.

The above is the default Procfile , if you need to expand more startup parameters, you can customize Procfile.

When the web server support is adjusted, packaged into War needs to adjust the startup command：

If the Maven project is packaged as a war package, Web service support needs to be configured.

The specific correspondence is as follows:

Selecting the tomcat7 version requires attention to ensure that the local can be run through java -jar ./webapp-runner-7.0.91.0.jar ./*.war. For detailed configuration of webapp-runner, please refer to webapp-runner Instructions for Use

If it is compiled into a war package, the war file will be decompressed to the /app/target/ directory by default at runtime. It is not supported to add a configuration file to the war decompression path, otherwise the application will not be able to start normally.